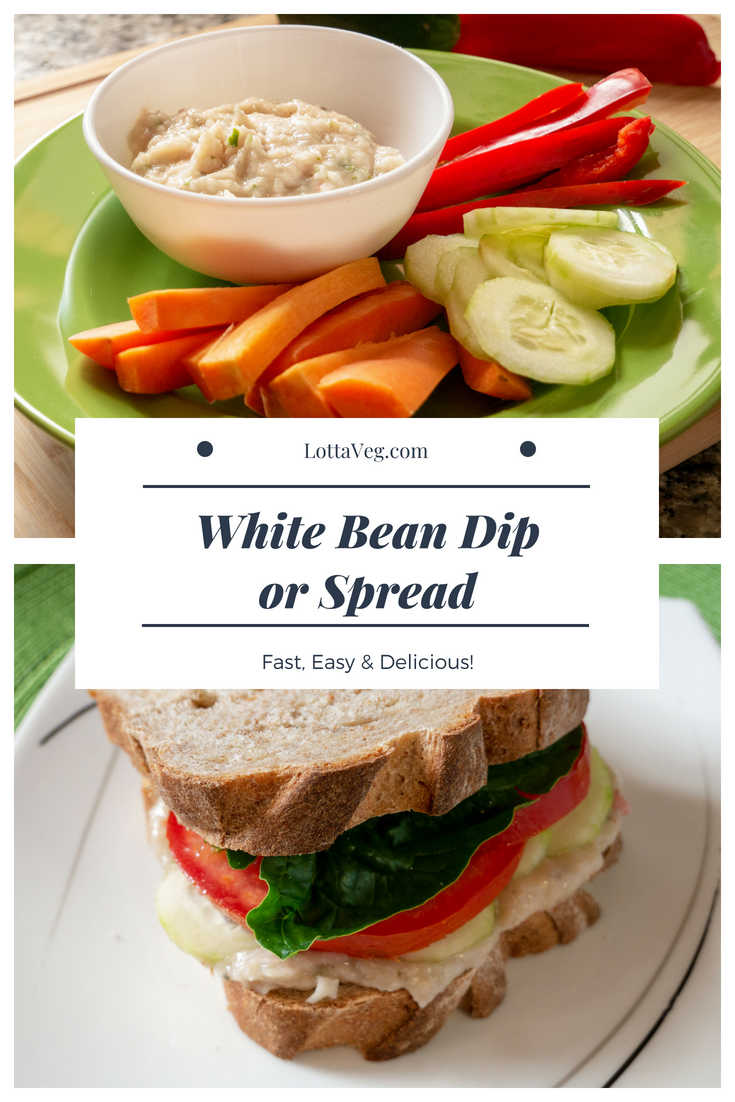 This White Bean Dip is great for dipping your veggies into, but it’s also a delicious and healthy spread for your sandwiches. It’s similar in texture to hummus, but it’s made with white beans instead of chickpeas. It’s a great option if you’re tired of regular old hummus (gasp!).

And Amelia says it’s “super easy” to make. You just combine all of the ingredients into a food processor and pulse it until it’s the consistency that you like.

Since there’s no tahini in this recipe, it’s much lower fat and lower calorie than traditional hummus. Thanks to the balance of protein and carbs, it’s a great pre or post workout snack, too.

It has a mild flavor so it tastes great with a wide variety of veggies, especially when used as a spread on veggie sandwiches. 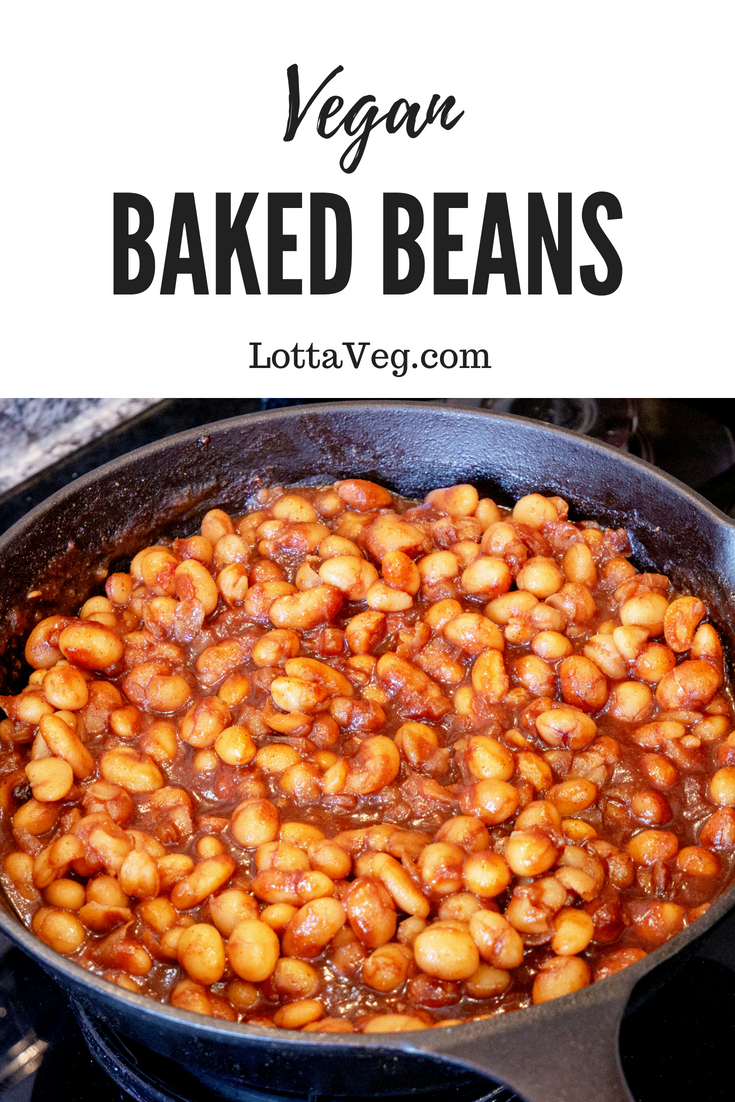 This Vegan Baked Beans recipe (or BBQ Baked Beans) is absolutely delicious! It’s sweet, savory and spicy, but it also has a LOT of sugar, so do your best not to eat all of it in one sitting!

For a 1/2 cup serving, there are 207 calories with 92 coming from sugar. It has 23 grams of sugar (still far less than a can of soda), which is more than half of the recommended daily value. That means this is NOT a health food recipe. It’s meant to be a treat on a special occasion (like Labor Day) or a family event when you want to show people how good vegan food can taste. If you’re currently a diabetic, you should definitely not eat these beans!

While this recipe does have a lot of sugar, it also has some healthy ingredients. The beans are loaded with protein and fiber, as well as calcium and iron. They’re also really low fat, with less than half a gram per serving. Our bodies are very efficient at burning carbs (including sugar) for energy, and they’re very efficient at storing fat for future use during times of famine (that most of us never have to experience). So if you’re in good shape, at your ideal body weight, and without diabetes, you can enjoy these Vegan Baked Beans knowing your body will know how to handle the carbs (it’ll probably make you feel like going for a long walk after dinner).

Most BBQ Baked Beans are made with lard and/or bacon, which obviously isn’t vegan or healthy (unless you live in upside-down world). However, you can achieve a similar taste by using liquid smoke. After all, that’s what gives bacon it’s flavor. Without liquid smoke and sometimes maple syrup or molasses, bacon would taste like bland, fatty meat…pretty much how all meat tastes without plants added for seasoning. But if the liquid smoke is too reminiscent of bacon for you, just skip it.

If you’re in the US, most liquid smoke and molasses aren’t vegan. That’s because they contain non-organic sugar, which is processed using the ground up bones of dead animals to give it a pretty white color. Sugar in most parts of the world has a tan hue, which tastes the same, it’s just not as superficially pretty. Look for “pure liquid smoke” without molasses. And look for vegan or organic molasses, or molasses made with organic sugar.

These Vegan Baked Beans pair well with any vegan burger, potato salad, corn-on-the-cob, green beans, or any of your favorite vegan recipes. 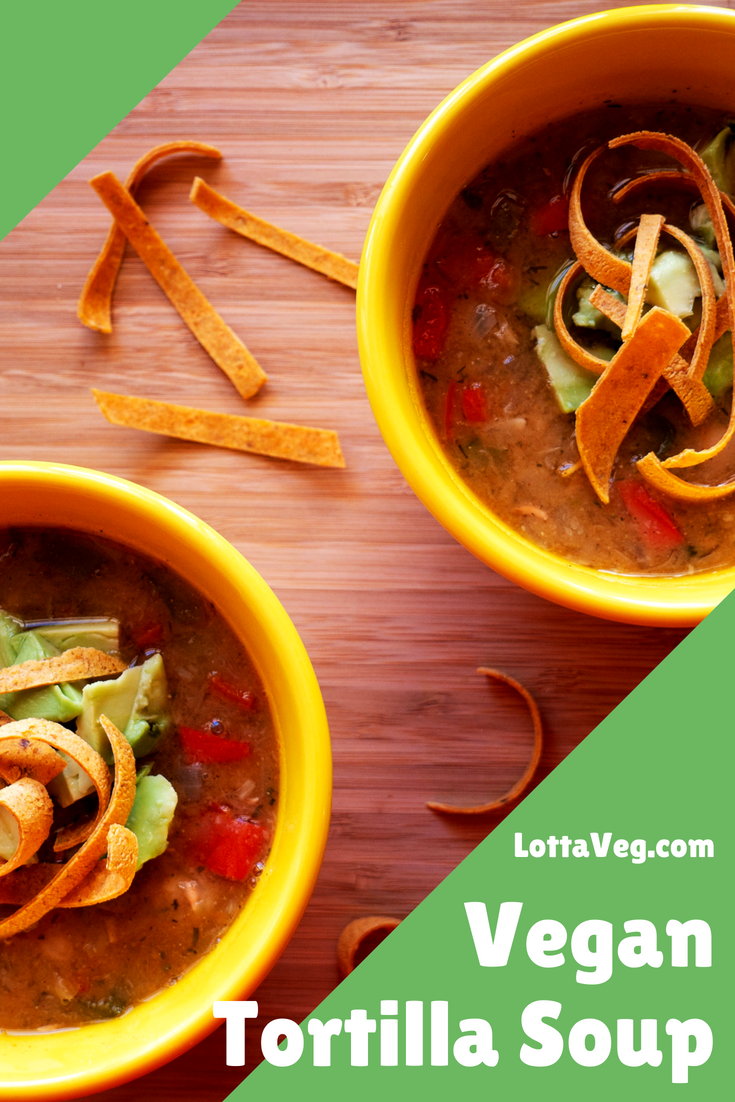 Even though I just finished eating lunch, my mouth is watering just thinking about this Vegan Tortilla Soup recipe! It’s that good!

While conventional tortilla soup typically uses chicken as the protein, we used white beans instead. Beans are loaded with protein and fiber, but contain no cholesterol nor measurable saturated fat. They’re also a good source of iron, magnesium and potassium.

There are several different types of white beans: navy beans, great northern beans, cannellini beans and butterbeans. We like navy beans in our soups because the starch gets released during cooking, making the soup creamier. However, you can use whichever beans you prefer or have on-hand for this recipe.

For the tortilla strips, we used two small corn tortillas made with only two ingredients: whole corn and water. Whole Foods carries organic corn tortillas that are made with corn, water and a hint of lime. When eating a whole-food plant-based (WFPB) no-oil diet, it’s important to look for minimally processed foods without added oils and sugars (or other mystery ingredients).

We cubed some avocado as a topping for our vegan tortilla soup, but if you’re trying to lose weight or lower your cholesterol, you may want to skip the avocado until you’ve reached your goal. Saturated fat, regardless of whether it comes from a plant or animal, will raise your cholesterol and can contribute to heart disease and weight gain.

This recipe pairs well with a nice Side Salad or some Corn Tortilla Corn Chips and Salsa. 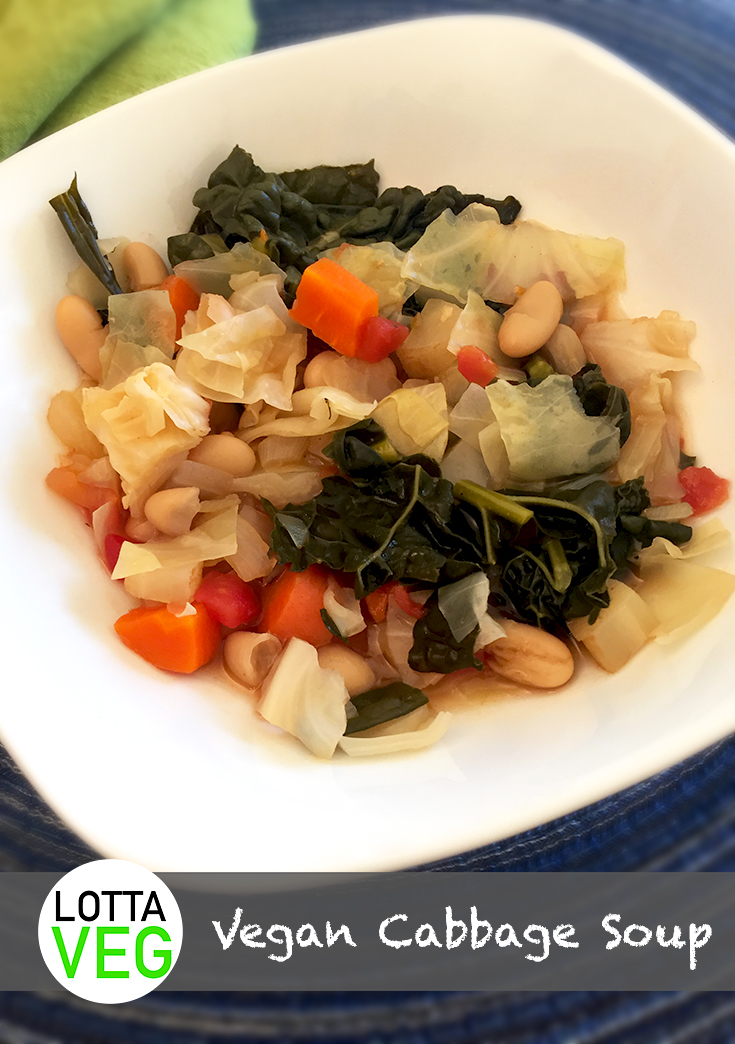 This Vegan Cabbage Soup is fantastic for your weight loss goals. It’s delicious, and two cups has 8 grams of fiber and 6 grams of protein, but only 112 calories! It also has 138% RDV of Vitamin A and 78% RDV of Vitamin C. How can you beat that?!

Everyone could use a little more cabbage in their diets and this recipe is a delicious delivery system for it.

To boost up the calories and make it a little heartier, try adding 3 or 4 diced potatoes when you add the cabbage. This soup will also go well with a nice Side Salad or a Vegan Baked Potato.

Note: We increased the seasonings to improve the flavor after we published the video. We recommend using the recipe instead of the video.