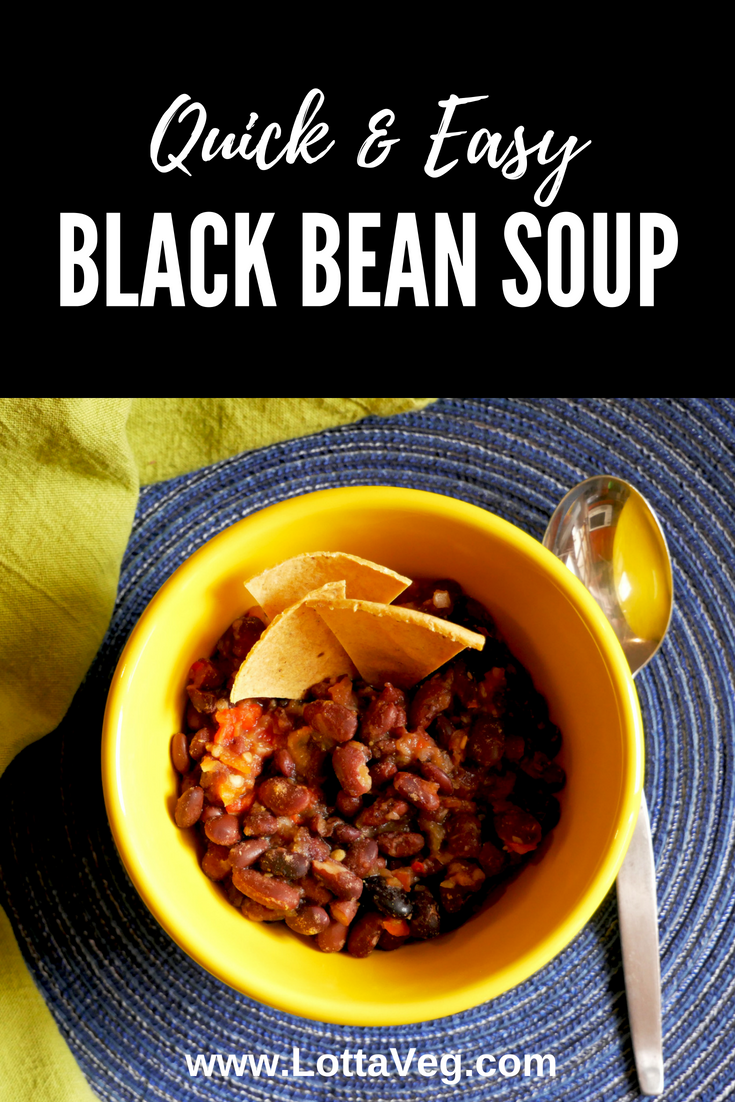 This Quick and Easy Black Bean Soup is just what it says, quick and easy. Amelia’s mom, Jane, got this recipe from the AARP Magazine and gave it to us. Amelia’s dad told us he LOVED it! We were just as impressed!

After we went vegan and started eating a whole-food plant-based (WFPB) diet, Jane was legitimately concerned. Like most American’s and western dieters, she was raised to believe that we need meat, dairy and eggs to be healthy. She voiced her concern about our dietary changes, but trusted that her daughter had done the research and knew what she was talking about.

Rather than becoming judgmental and insisting that we were wrong and she was right, Jane decided to educate herself by first reading How Not To Die by Dr. Michael Greger. Then she watched What The Health on Netflix and started looking at more information from the WFPB doctors and scientists.

It took her a little while to come to terms with the unhealthy food marketing myths that we were all raised to believe, but now she often tells us how right we are. She even bought Dr. Greger’s How Not To Die Cookbook and cooked several of his recipes for us!

I have immense respect for anyone who will look at new information with an open mind, and be willing to change their stance when presented with new, credible information. It was certainly difficult for me to change my mind and I sometimes still think to myself, “It’s been over 2 years and I still haven’t died yet!” In reality, I’m far healthier, my cholesterol is down and I’ve lost nearly 30 pounds without trying.

Back to the recipe at hand… This Quick and Easy Black Bean Soup recipe couldn’t be much easier. It literally took a couple of minutes to prepare and less than 10 minutes to cook. You just add two cans of black beans to a pot with a cup of salsa and a teaspoon of cumin. Stir it up and heat it until it simmers.

The original AARP recipe didn’t call for salt, but we thought it needed some so Amelia added 1/2 tsp and that seemed to bring out the flavors more. We also used our Grandpa’s Vegan Dipping Hot Sauce as the salsa, but you can use store-bought to save time. Just make sure it doesn’t have added oils.

It would also be delicious with some sautéed chopped peppers, jalapeños, garlic and/or onions. You can sauté them first with some veggie broth or water in the same pot (covered) for about 5 minutes. This is called steam frying. Then pour the other ingredients in on top and stir. Continue heating it until it’s bubbly.

You can serve this Quick and Easy Black Bean Soup plain in a bowl, or serve it over brown rice, yellow potatoes or sweet potatoes. Yum!