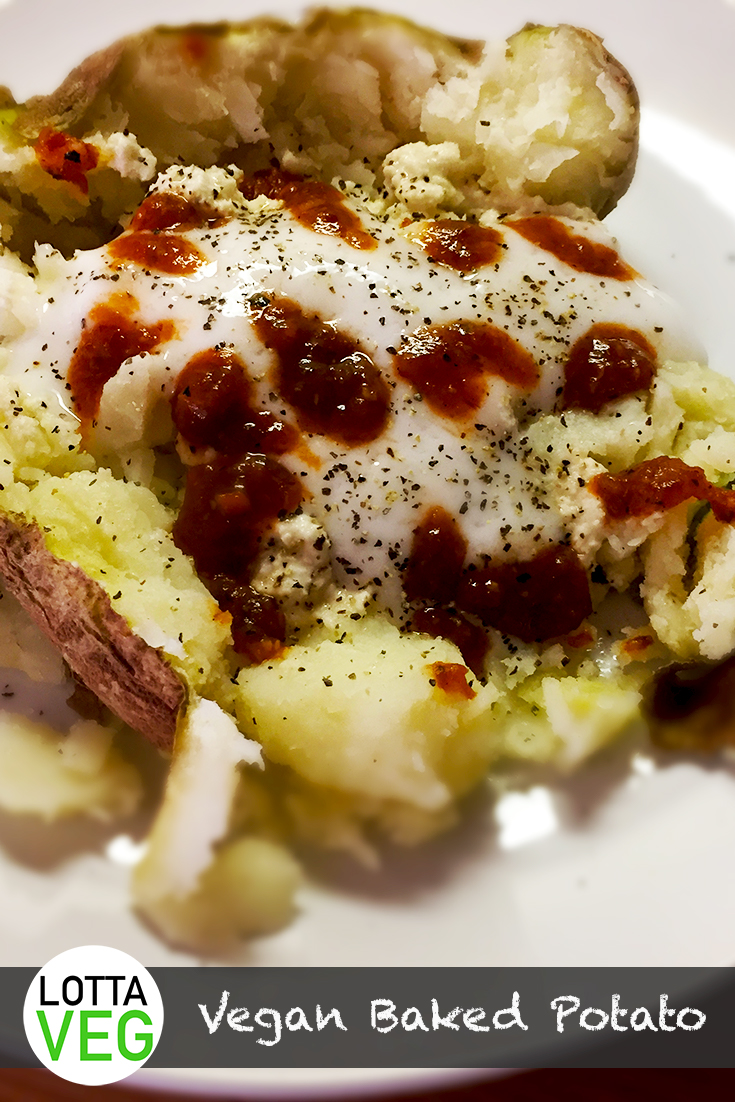 This Vegan Baked Potato recipe is a staple in our vegan meals. Potatoes garnished with tasty toppings make a delicious side dish or even a good main dish for lunch.

Contrary to what you’ve been told over the years, potatoes are a very healthy food, especially if you want to lose weight. That’s because they have all of the essential amino acids you need to build muscle, they’re low calorie, and they’re a good source of fiber to keep you full longer. Top them with healthy ingredients to make them taste great and you’ve got yourself one healthy, filling dish.

Dr. John McDougall is a plant-based diet expert and a potato champion. Learn more about his research and stance on potatoes on his website or in his book, “The Starch Solution.”

If weight loss is your goal, it’s best to reduce the amount of oil you consume as mush as possible. That means no vegan butter on your potatoes because it’s nearly 100% oil. Gram-for-gram, fat (9 calories/gram) has more than double the number of calories as protein and carbs (4 calories/gram).

And oil is one of the worst forms of fat because it’s easy to use a lot of it without realizing it. One tbsp of vegan butter has 80 calories (all of them from fat) and no fiber. A medium baked Russet potato with the skin has 169 calories (none from fat) so adding a tbsp of vegan butter as a topping increases the calories by nearly 50% but doesn’t make you any fuller.

There’s a relatively new movement to blame the obesity epidemic on the low-fat craze that started in the 80’s, but what people don’t remember is that the low-fat craze started because we already had a growing obesity problem, and an existing heart disease epidemic. Several studies in the 60’s and 70’s concluded that fat was the main culprit so the low-fat craze was born.

Unfortunately, without fat, the food tasted terrible, so the food companies replaced the fat with sugar. The added sugar and over-processing of foods, along with fats from increased animal product consumption, are the main contributors to our increasing obesity and heart disease epidemic. If you want to learn more about this topic, watch the documentary Fed Up.

We like to use unsweetened, plain, non-dairy yogurt as a topping for our potatoes because it tastes a lot like sour cream and it’s fortified with B12. We also like to use our Vegan Cashew Sour Cream for some additional protein and healthy fat.

You can microwave your potatoes, but they taste better baked in the oven. Just remember to preheat the oven about an hour before you want to eat. I always forget that and end up microwaving them half the time! 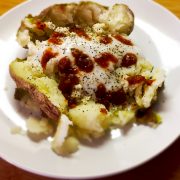 Baked Potato
This Vegan Baked Potato recipe is both delicious and filling. Use the baked potato as the base and garnish it with any of your favorite vegan toppings.
Ingredients
Servings: servings
Instructions
Recipe Notes

Want to join the discussion?
Feel free to contribute!

Nutrition Label for this Recipe